South Korean baseball teams are thinking of ways to play all 144 games of their Korea Baseball Organization season. However, what’s concrete is that there will be no shortened KBO doubleheaders.

Major League Baseball is playing seven-inning doubleheaders to ensure they play all the games in the season. However, the KBO will have none of that despite scheduling problems due to the bad weather.

The executive committee of the KBO changed the rules governing doubleheaders in the league. According to the new regulations, the league will reschedule canceled games due to bad weather as doubleheaders within the month. 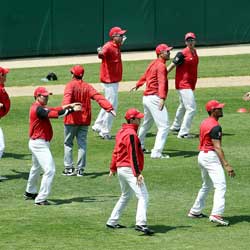 In the past, the KBO didn’t have doubleheaders in its schedule for the months of July and August. According to Korea sports news reports, the league wanted to protect players from the heat of summer. Also, it will reduce the risk of injury.

Based on sports wagering sources, rain instead of high temperatures wreaked havoc on the KBO schedule this month. Until last Wednesday, the league canceled 45 games due to bad weather. Most of the canceled games were in July.

The KBO has a compressed schedule because it started the league later as usual due to the coronavirus pandemic. According to sports betting odds reports, the KBO will still play all 144 games of the season. Also, it hopes to hold the Korea Series before December.

In the US, the MLB has a 60-game season that started on July 23. The shortened MLB season features seven-inning doubleheaders. They will allow players to lower injury risk and give players more rest. Also, it will enable the league to hold as many matches as possible.

The KBO will not have shortened doubleheaders. The KBO said that they would not change the rules in the middle of the season to prevent affecting the integrity of the competition.