The Houston Astros will go to the Yankee Stadium on Wednesday for Game 4 of the Astros vs Yankees ALCS. The former leads the series 2-1 after outdueling the Yankees 4-1 in Game 3.

Gerrit Cole gave a strong performance in the last game by throwing seven shutout innings with seven strikeouts. In addition, Jose Altuve and Josh Reddick provided the offensive power for the Astros. 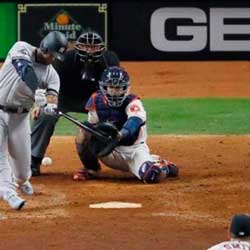 Sports betting analysts predict that the next game will be a battle of the bullpens. As a result, expect the score to be higher than the previous games. Sports betting odds for the Astros is +100 and the Yankees at -110. The total is at 9.

It should be noted that both teams have not announced their starting pitchers for the game. The New York is 8-3 in the last eleven meetings with Houston at the Yankee Stadium. Also, they won four of their last five home games. In the last 12 playoff matches, the Yankees are 9-3 at home.

On the other hand, Houston is 15-5 in their last 20 matches. They are 9-3 in their last 12 away games. The under-covered four of their last six games with each other. Also, under was hit in 12 of the last 16 games of the Astros.

The Yankees will try to win at their home stadium. The Yankees were unlucky last game and they will try to have a strong start to ensure their victory in Game 4. Also, you should consider betting on under even though it will be a battle of the bullpens.

Bet on the MLB ALCS with VOBET, the best sportsbook in the world!