AS Roma vs Bologna – Italian Serie A Betting Pick

AS Roma tries to bounce back from its worst performance this season as it faces Bologna this Friday. Also, Paulo Fonseca forced to make a considerable change in his lineup for the AS Roma vs Bologna game. Lorenzo Pellegrini got a red card in their last match. As a result, he’s suspended for the match against Bologna.

With Pellegrini’s suspension, soccer forum users are speculating who will replace him in the starting lineup. Also, AS Roma will miss the services of Diawara, Zappacosta, and Zaniolo due to injury. 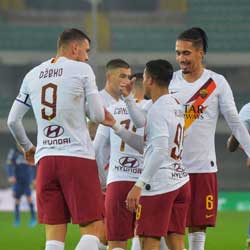 Football betting sites have documented Roma’s struggle at the start of 2020. They conceded many goals. Also, they can’t get the results they were looking for. At present, they have 39 points in 22 league matches with a record of 11-6-5.

Roma is fifth place in Series A, which seems like they are doing well in the season. However, their performance deteriorated in recent months, and they started dropping behind the league leaders.

In their last five league games, they went for 1-1-3 to earn four points. Also, Juventus eliminated them from the cup. They need a positive result against Bologna to stay on track. However, they need to step up their defense if they want to win the match.

On the other hand, Bologna had a good season last year when they ended up in tenth place. At present, they are at a pace to finish at the tenth place once again. They are in the middle of the pack. Also, they are two points behind sixth place. They have a two-game winning streak.

AS Roma vs Bologna Pick

The first game between the two teams this season ended 2-1 in favor of Roma. Sports betting odds makers expect the score to be the same or at least three goals scored in total.